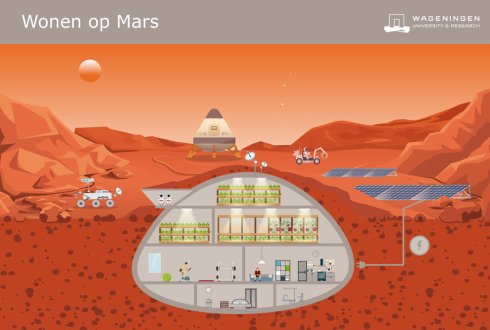 On June 28th the crew of the Mars Society Netherlands visited the Food for Mars and Moon project at Wageningen University, led by Wieger Wamelink. What distiguishes him from other space farmers around the world, is that they are looking at hydrocultures, while he is working with soil simulants. Wamelink: “To grow vegetables in soil rather than just water is more natural. How are you going to get human feces back into the cycle without soil? That will involve complicated chemical processing.” He started his research six years ago, combining his interest in space with his passion for ecology. Here are some of his conclusions:

After having added organic material to the Martian soil simulant (derived from Hawaii), several crops grew really well. Much better than they did on the moon soil simulant. A reason for this could be that the moon soil simulant is pretty sharp which causes injuries in the roots of the plants. With the latest harvest, a haute cuisine meal was prepared for a group of people and tasted delicious!

As to the difference in gravity on the moon and Mars, this appears to be no problem for plants. They can also use their light source to determine where to grow their roots and where to grow their leaves. But they will tend to grow bigger with less gravity.

Cosmic radiation is just as dangerous for plants as it is for humans, as it damages the DNA, which causes disease. On Mars there is no magnetic field and a very thin atmosphere which cannot give protection against the cosmic radiation. According to Wamelink, that’s why plants on Mars will have to be grown underground, with artificial lighting.

On Mars the soil contains haevy metals, but they do not dissolve in water, so it is no problem for the plants. What is a problem, is the perchlorate in the Martian soil. Not only for plants by the way. Also for humans when they get it in their lungs and for robots, as it damages their wheels. The perchlorate should therefore be removed or converted into harmless substances by bacteria, before growing crops.

Wamelink plans for a little ecosystem to travel to Mars, with crops like potatoes and beans, bacteria, fungi, bumble bees (which will go into hibernation during the journey) and worms. Maybe even chickens, as they are very efficient in producing meat and eggs, have excellent feces to fertilize the soil and can be comforting to humans as pets. Before we go though, further research on Martian farming needs to be done: on fungi and bacteria, on the complete little ecosystem being circular year after year and on robots, who could go their before us to set up the ecosystem. To support the future food system on Mars, you can make your donation here.

One Way Ticket to Mars